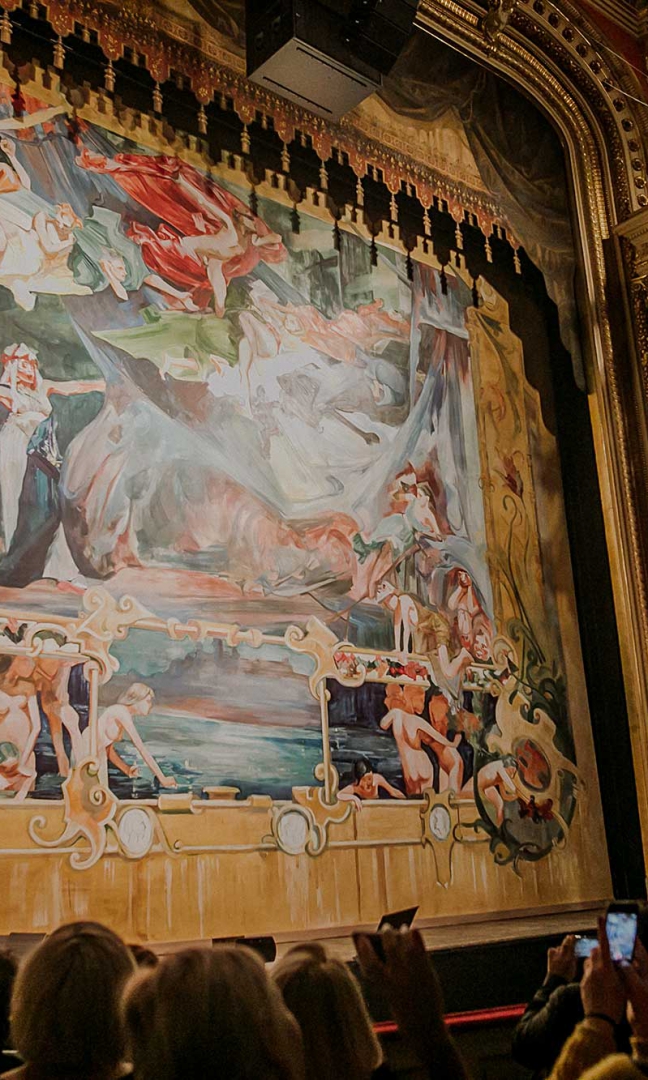 The unveiling of a new curtain designed by Stanisław Wyspiański

From the very beginning – since the creation of the Municipal Theatre in Krakow – Stanislaw Wyspiański was closely associated with this stage. But although one can always feel his presence as its spiritual patron, the building itself offers no tangible trace that could be connected with Wyspiański.

Thanks to the efforts of Krzysztof Głuchowski, the Theatre Director, and funds donated by the Małopolska Regional Development Agency, the Słowacki Theatre has created its second curtain based on the artist's 1892 sketch. The painting works were supervised by Tadeusz Bystrzak, the author of a copy of Nero's Torches and other works. The new Wyspiański curtain will be displayed interchangeably with the famous Henryk Siemiradzki curtain, which has existed for 124 years.

Since his debut in 1898, Wyspiański was associated with the Municipal Theatre (presently the Słowacki Theatre) by shaping it artistically, writing, creating stage sets for the premieres of his own works, and by reforming theatre ideas. It was here that he staged his Wedding in 1901, and following its success he was entrusted with the task of staging Adam Mickiewicz's Forefathers' Eve. This was the first Polish staging of this drama, in which Wyspiański combined all the parts of Mickiewicz's work into one piece, and his adaptation was then used for the subsequent twenty years. Stanisław Wyspiański's works and productions contributed to the European success of the Municipal Theatre.

Few people know that in 1892, the author of The Wedding also entered the competition for the design of the curtain for the Theatre and submitted his work called From My Fantasies. Even though the competition was resolved, it was won by lesser-known artists, and the curtain was finally commissioned from Henryk Siemiradzki. The present management, with the support of the Małopolska Regional Development Agency, would like to commemorate this event, and to give the viewers and visitors of the Theatre tangible proof of the importance of this Małopolska artist:

‘From the very beginning of my management of the stage in Św. Ducha Square, I have dreamt that the Theatre would boast an artifact connected with Wyspiański. Admittedly, we still use the stage where Wyspiański staged his dramas: Liberation, La Varsovienne, Boleslaus the Bold, The Wedding and others, but it is a symbolic association, connected with memory. The Theatre has preserved nearly nothing that indicates that it is and will always be his home. Hence the idea to use the sketch of Wyspiański's curtain and to make it happen’, explains Krzysztof Głuchowski, the General and Artistic Director of the Słowacki Theatre.

‘Our involvement in the creation of the new curtain at the Słowacki Theatre has enabled us to combine culture, business and values. In his work, Wyspiański indicated the importance of values such as freedom and independence, which are also essential in business. The goal of business is not merely to earn money. As part of our mission, we want to present how entrepreneurs can become involved in the development of their region. The support for the creation of the new curtain is our contribution to the history of the Krakow Theatre,’ says Jan Pamuła, President of the Małopolska Regional Development Agency.

The Wyspiański's curtain project was undertaken by Tadeusz Bystrzak – an artist, painter, sculptor, set designer and interior designer. Tadeusz Bystrzak graduated from the Faculty of Industrial Design at the Academy of Fine Arts in Krakow in the atelier of Professor Ryszard Otręba. His work includes easel, illusionist and large-format painting, as well as artistic and applied glass design. For many years he has been successfully involved in designing and creating various types of public and commercial spaces, including the famous copy of Henryk Siemiradzki's Nero's Torches.

The new curtain painted according to Stanisław Wyspiański's design was unveiled on 9 October at 11:00 a.m.. Following this event,it will be displayed before selected performances, the nearest of which is the premiere of Wyspiański. Concert on 19 October 2018, and all subsequent Concerts.

Authors: Tadeusz Bystrzak and his team of the Academy of Fine Arts graduates: Alicja Wójcik, Marta Wojtuszek, Stanisław Juszczak
Easel made by: Michał Popiel
Stretcher made by: Leszek Bugaj
The hall in Skała made available by: Andrzej Serafin – Serafin Company
Prints of the curtain and fragments made by: Wojciech Skrzypiec from the Attyka publishing company
Filming of the process of creating the curtain: Erika Badayan

The new curtain is financed by the Małopolska Regional Development Agency. 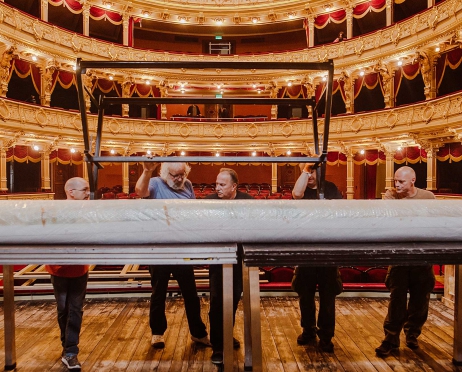 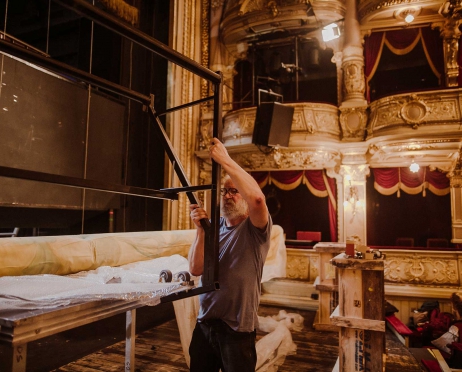 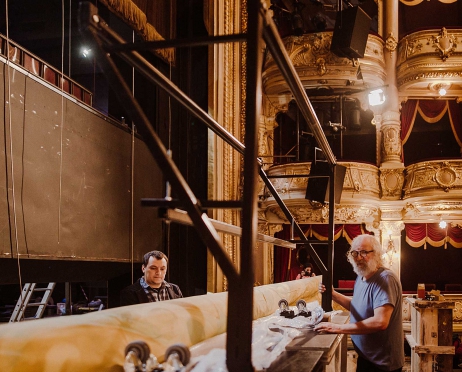 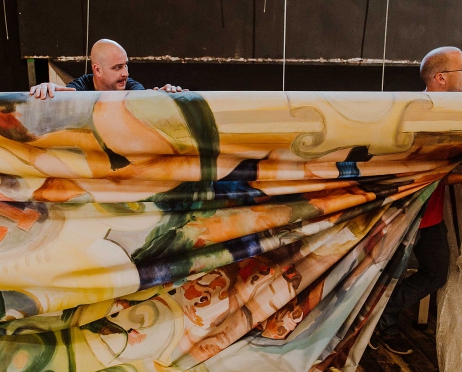 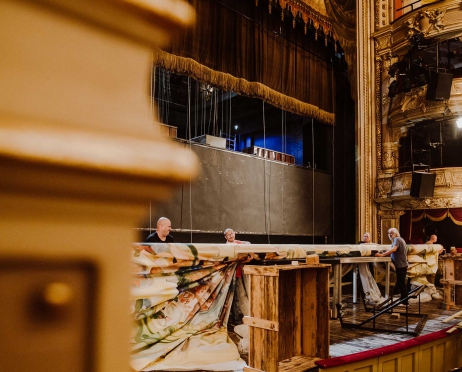 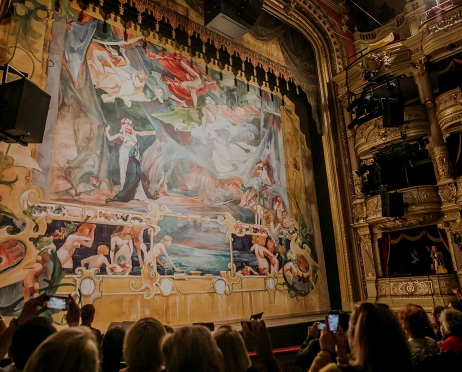 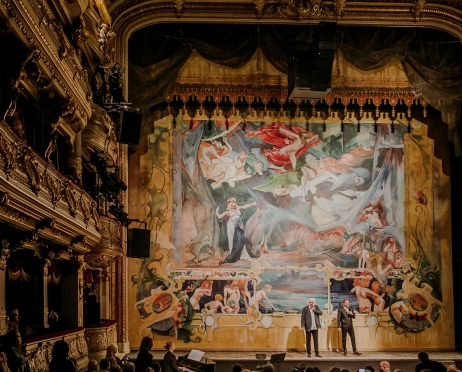 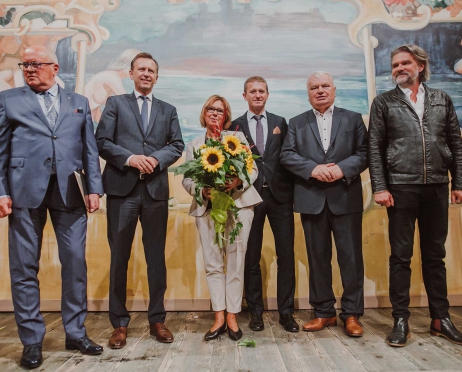 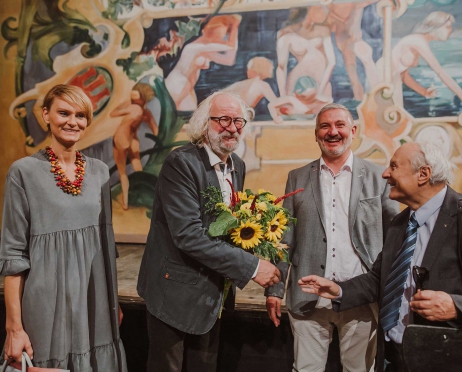 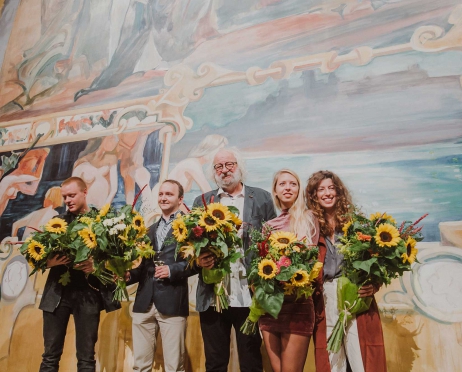 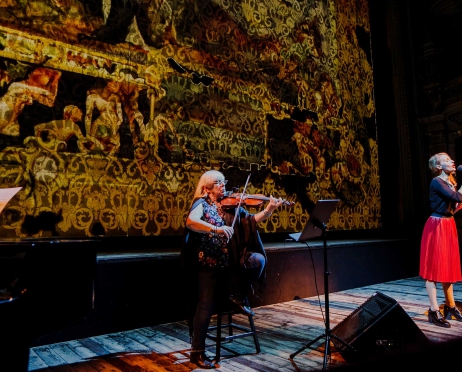 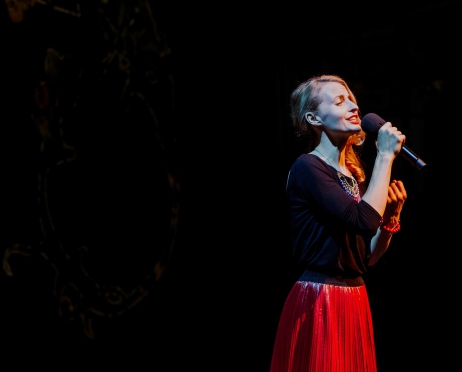 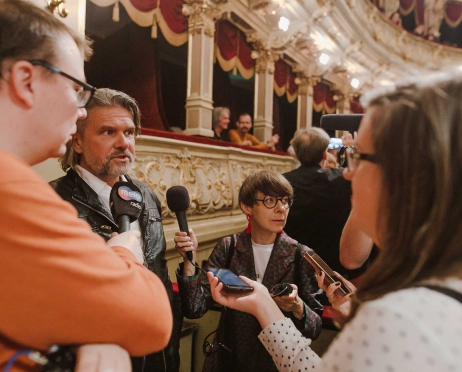