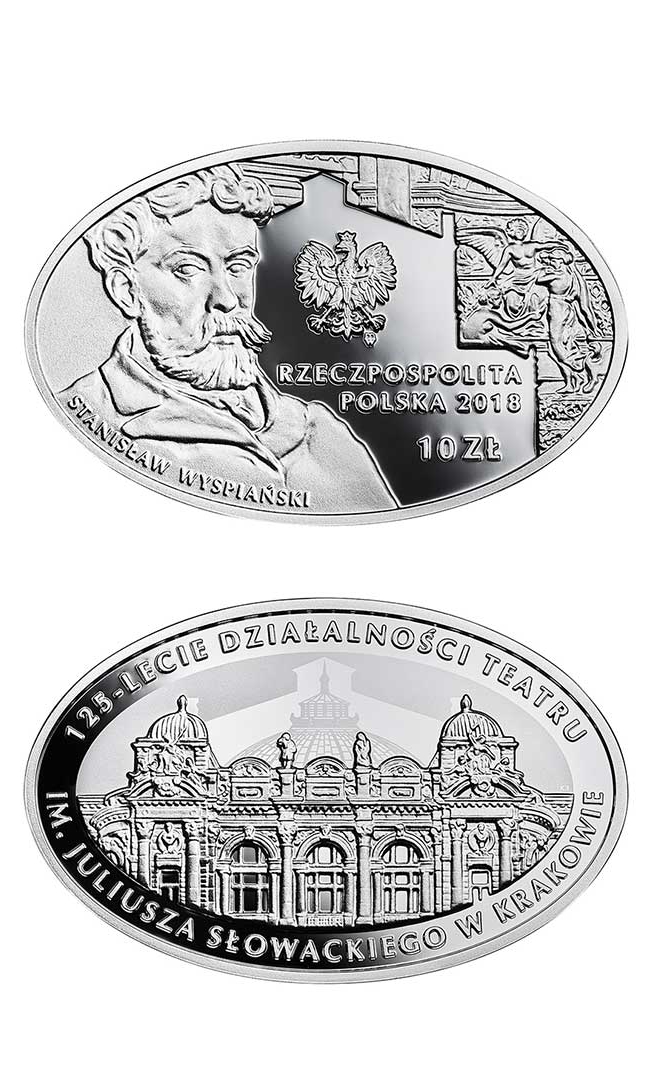 The Juliusz Słowacki Theatre boasts its own coin!

On 6 September 2018, the National Bank of Poland issued a silver coin with the face value of 10 PLN to mark the occasion of the 125th anniversary of the Juliusz Słowacki Theatre in Kraków. Collector coins commemorate important events and anniversaries connected with Polish culture. One side of the silver 10 PLN coin features the façade of the Theatre building, while the other presents figures from Henryk Siemiradzki’s famous curtain, and Stanisław Wyspiański ‘s self-portrait. The coin's issue price is 140 PLN, and its official launch will take place on 14 September at the Theatre, during the inauguration of the theatrical season.

‘The coin commemorates the 125th anniversary of the Słowacki Theatre – a place of great importance for the development of Polish culture and Polish theatre. It was here that Stanisław Wyspiański created and staged his dramas, and it was here that modern European stage production was formed thanks to this remarkably gifted artist. The activities at no. 1 Św. Ducha Square in Krakow made us famous throughout Europe. On the one hand, art permeated the borders of the partitions, and on the other, it shaped mature patriotism here, locally’. – says Krzysztof Głuchowski, the Director of the Theatre.

The Juliusz Słowacki Theatre in Krakow was founded in defiance of the then time period, in the partitioned Poland, when it was forbidden to speak out about freedom and independence. However, the municipal authorities of that time rightly acknowledged that there is strength in the advancement of culture, and thus established the Theatre which adopted the phrase ‘Krakow for national art’ as its motto. The building was designed by Jan Zawiejski, a renowned Krakow architect of Jewish origin, and the official opening of the stage in Św. Ducha Square took place on 21 October 1893, which makes 2018 the 125th anniversary of this day. A coin commemorating this event was minted to mark this occasion.

The official presentation of the coin will take place on 14 September at 7:30 p.m. during the inauguration of the season at the Słowacki Theatre.

The reverse features an image of the façade of the Juliusz Słowacki Theatre which was designed by Jan Zawiejski.

The right-hand side of the obverse presents figures from Henryk Siemiradzki's curtain: Inspiration introducing Beauty to Truth. The left-hand side features a self-portrait of Stanisław Wyspiański, whose work determined the entire history of the Juliusz Słowacki Theatre.

Issuing Party: NBP (National Bank of Poland). The coin was produced by the Mint of Poland on behalf of the NBP.

The issue price of the coin is 140 PLN, and the sale is carried out in regional branches of the NBP and via the NBP online shop. The coins will also be available for purchase during the inauguration of the season at the Słowacki Theatre on 14 September this year.